At the time of going to print, the situation was getting worse every day in Tasmania.

PCA members, Marcus and Anthony Brandsema have unfortunately been caught up with the Queensland Fruit Fly outbreak in the Spreyton region of Tasmania, with devastating effect.

PCA empathises with all the growers affected, and send strong support for a quick action to rectify the situation.

This is a timely reminder of how fragile our produce is, in outbreaks of destructive diseases, and how quickly our market access can change.

Many lessons are being learned in Tasmania, including boosting Biosecurity Tasmania. “We always need to be assessing our processes to ascertain if we are prepared for the worst and have our action plans in place” says Nicky Mann, PCA Chair.

Fruit flies cause enormous damage to fruit and some vegetable crops around the world.

They are unlikely to cause the same damage in Tasmania, but their presence at low levels may impede export trade. It is important for our horticultural industries that we keep fruit fly out of the state.

There are around 14 species of fruit fly of potential economic concern on the Australian mainland. The two that pose the most risk to Tasmania are:
• The Queensland fruit fly along the eastern seaboard and in the Northern Territory
• The Mediterranean fruit fly in Western Australia.

What is Queensland Fruit Fly? 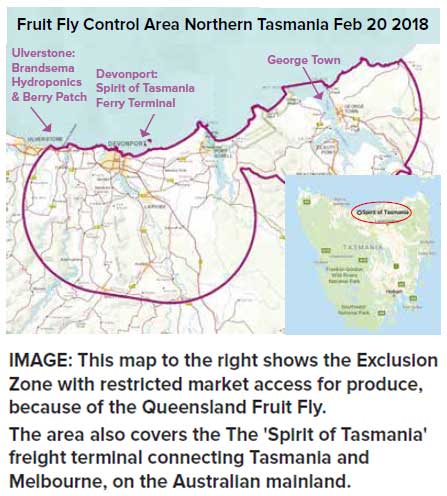 A mature fruit fly is around 7 mm long and is reddish brown with some yellow markings (see image above).

A key sign of fruit fly is a series of “stings” visible on the outside of the fruit. A “sting” is a puncture mark caused when a female adult lays eggs into the fruit.

If you open up the “sting” carefully with a sharp knife, you should see a cavity containing eggs or the debris of hatched eggs – you would probably need a magnifying glass to see it.

The number of maggots (larvae) in a single piece of fruit varies from as little as 1 to more than 60, however typically we would expect to find 4-20 maggots in each piece of infected fruit.

Tasmania’s fruit fly free status is recognised by key overseas countries. This status give Tasmanian exporters competitive advantage in key markets such as Japan, Korea, USA, Taiwan and China. For many years, the belief has been that fruit fly would not survive a Tasmanian winter.

However, even a temporary summer population of the pest can disrupt fruit exports. Any degree of trade disruption by the possible loss of preferential fruit fly area freedom, is undesirable for growers. 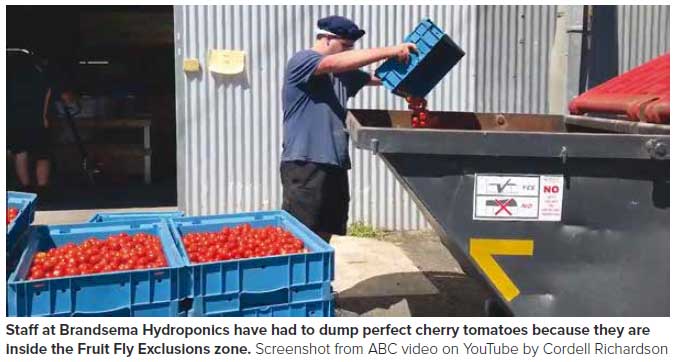 The Cost of Fruit Fly

The cost of fruit fly to producers where it exists on the mainland is substantial. That cost includes:
• Loss of product due to infestation
• Restricted market access for product from within the biosecurity area (typically 15 km radius of an infested property)
• Costs of an eradication program (typically baiting)
• Costs of ongoing insecticide use
• The loss of any market premium that goes with post-harvest fumigation of exported fruit.

It is estimated that Tasmania’s fruit fly free status adds tens of millions of dollars a year to the export income earned by Tasmanian horticultural industries.

Biosecurity Officers are now visiting local markets to check out what is being sold.

They have found fruit fly infected produce in Wynyard (apricots) and 5 kilos of produce were seized from a passenger flying in from Flinders island early in February.

Tasmanians have expressed their anger at such “selfish” behaviour on behalf of stall holders and travellers. 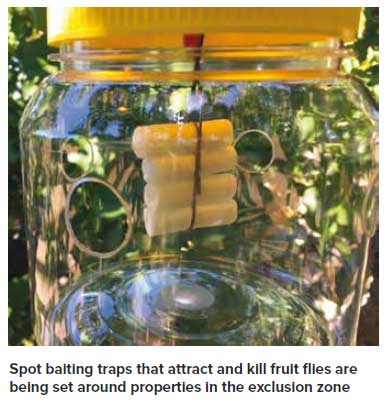 How the infestation evolved

The first larvae was found in a backyard apricot tree in Spreyton, near Devonport in late January.

It took a week before the larvae was found in apricots on three different sites at Flinders Island in Bass Strait, meaning the whole of Flinders is now classified as a control zone.

There are still some uncertainties what the Fruit Fly infestation means for exporters, buyers and fruit lovers.

The map on page 8 shows the current exclusion zones includes the location of several PCA members, one of the state’s major fruit growers, as well as smaller apple, cherry and berry orchards.

Within the Exclusion Zone these growers cannot sell their produce unless it is first fumigated.

However the fumigation facility is in Melbourne so the Tasmanian produce from within the control area has to travel to the mainland to be treated with a cold sterilisation or methyl bromide protocol treatment, before being sent back to wholesale and retail outlets in Tasmania.

90% of the Brandsema’s business is in Tasmania and now it all has to be sent to Melbourne first for the Biosecurity Tasmania Documentation adding time, handling and expense.

Exporting out of Tasmania

Nick Hansen from Fruit Growers Tasmania said the rules for exporting fruit fly affected produce from Tasmania to other Australian states are still being negotiated, but he believed it would be allowed to go to states already affected by the pest.

“There is no reason why Victoria, New South Wales and Queensland would not accept fruit from within that control zone, simply because they are not fruit fly free,” Mr. Hansen said.

“Fruit from outside the North Tasmania control zone can continue to be shipped, exported around the world safely with no problems whatsoever,” Mr Hansen said.

“The complication in this matter is that the fruit has to travel through the control zone to actually board the Spirit of Tasmania ferry.”

It means that “fruit fly-free fruit, travelling through the control zone has to be also be specially packaged to be certifiable.”

Marcus Brandsema has said, “We have insurance for business interruption and it covers us for insurable events like storm, floods, fire, but this is different and not claimable”.

“We even thought about cutting the stems, because if we’re not picking fruit we’re not having to pay staff”.

“A government assistance package is tailored around maintaining business status quo as much as possible. Even though we are sending produce to Victoria they’ll meet the gap, and that way we can keep all our staff.”

“Any produce that cannot be shipped to Melbourne is weighed before being destroyed, and those costs are reimbursed,” Mr. Brandsema said. “It’s a bit of a logistical nightmare, but it’s what we have to do.”

To eradicate fruit fly, DPIPWE is setting out insect traps and collecting fruit in areas near the fruit fly detections.

The number of fruit flies in Tasmania is currently estimated to be low so it is important to use a number of methods to make sure the flies are destroyed and enable them to be eradicated.

One of the eradication methods is spot baiting.

The bait is a liquid blend of protein and sugar mixed with insecticide.

It is important to place these spot baits throughout the area where fruit flies may be present, including in people’s gardens.

DPIPWE is seeking support from both commercial growers and domestic households to allow spot baits to be placed on their property.

A contractor applies about ten spots of this mixture to the leaves of fruit trees and/or ornamental trees on your property. This will take about five minutes.

One round of spot baiting is not enough so contractors will return and repeat this process about weekly until DPIPWE is confident there are no fruit flies in the area.

Growers within the zone now face a three-month wait to discover if the species has taken hold and spread.

Eradication, surveillance and management of waste and risk produce activities remain ongoing within the areas where fruit fly has previously been detected in the State.

There has been no change to the current Control Areas which remain in place on Flinders Island and in northern Tasmania.

No detections of fruit fly or larvae have been made outside the current Control Areas.

At and around the detection sites within the control areas eradication activities are continuing with spot baiting being undertaken.

Surveillance is also being undertaken with ongoing inspection of host produce at and around identified sites as well as monitoring of approximately 1500 fruit fly traps around Tasmania.

Within the current Control Areas existing movement controls remain in place. Within the Northern Tasmania Control Area roadside bins are in place on major routes to enable disposal of produce for people leaving the Control Area. Regular clearance of these bins is also occurring.

Staff are also continuing to attend farmers markets and other events as part of providing the latest information and ensuring compliance with current requirements.

By far the most likely way is as maggots or eggs in fruit and susceptible vegetables. That is why Biosecurity Tasmania is so rigorous in policing the ban on tourists, interstate home gardeners and returning Tasmanians from bringing fruit and vegetables into the state.

It is possible, but unlikely, that mature fruit flies could be brought across Bass Strait on the ferry or by plane.

The distance across Bass Strait is such that mature fruit flies being blown over from the mainland is considered highly unlikely.

Reports of fruit fly can be made by contacting Biosecurity Tasmania on 03 6165 3774.

Further information and the latest Control Area maps can be found at; Department of Primary Industries, Parks, Water and Environment (DPIPWE)
www.dpipwe.tas.gov.au

The PCA Facebook page has many comments from people from various parts of Tasmania. The Turners Beach Berry Patch, who are next door to Marcus Brandsema) write “We have some news regarding the fruit fly quarantine at the Berry Patch. Unfortunately our circumstance has changed due to the tightening quarantine restrictions. How this impacts us – we aren’t able to sell fresh fruit of any kind until the end of quarantine (about 3 months).

The good news is that we still have our delicious café menu open for dining daily, as well as our very much loved berry ice cream, and frozen fruit for purchase.

We know there will be many questions and we do our best to respond as we can. It’s an unfortunate circumstance for our business, however we look forward to seeing you for dining, ice cream and other goodies we sell at the café!