Can Hydroponics be organic? And does it really matter?

Can Hydroponics be organic? And does it really matter?

Myth-busting can be a full-time job, especially in the world of food. For every myth that gets busted, a few more crop up.

Case in point, a recent article that highlights arguments of a few organic champions who are vehemently opposed to hydroponic farms becoming organic certified.

The really interesting part of the story is why they think hydroponic farms are not worthy of being anointed ‘organic’ and included in their exclusive round table.

A deeper look at their views affords an opportunity to examine hydroponics with a fresh perspective. Not to mention, a chance to bust some myths along the way!

Here’s why they think hydroponics cannot be organic:

‘No soil is used to grow the plants, so that’s not natural’

Why does that seem so unnatural? There are many plants that naturally grow in water, some in fact grow only in water.

Did you know that the beloved mint naturally occurs in the wild in moist areas only i.e. along river banks, ponds and lakes? Since it was also able to tolerate warm and dry conditions, humans have been growing it on dry land; perhaps because it seemed more practical for cultivation.

So then, does it really seem so unnatural that land-based lettuce is grown in water in a hydroponic farm, because it is more efficient (by the way, they love the water and grow splendidly, almost 25% faster) 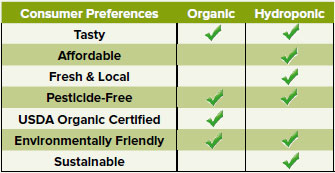 ‘But it is soil that makes the plants tasty’

Taste, according to Dr. Gene Giacomelli, professor of agricultural engineering at the University of Arizona, can be a complex mix of genetics, plant cultivars (different species), growing conditions and agricultural management, for both field-grown and hydroponic produce.

Once upon a time, long long ago, hydroponic produce was perhaps lacking in taste. Not true today.

As the technology advances and more research is undertaken, different nutrient mixtures are being developed and used in hydroponic farms.

The end result is that the produce from hydroponic farms is as tasty as soil-grown produce, sometimes even more owing to the fact that it is fresher.

While it may not be possible to replicate every nutrient that occurs in soil, Dr. Giacomelli points out that “in a taste test, often you can’t tell the difference” between hydroponic and field-grown crops (Source: NY Times).

The increasing number of chefs and supermarkets interested in hydroponic produce definitely suggest that taste of the produce is no longer a concern.

Because that’s not how we have been doing it for centuries, it is wrong. But is it really?

In that vein, agriculture itself is unnatural.

Wheat, corn, rice, lettuce and tomatoes do not exactly occur in nature in neatly stacked rows; they don’t grow exactly where, when and how much we want them to.

We tweaked nature by inventing cultivated agriculture, adapted it to suit us and sparked civilization to become what we are today (else, we would all still be hunting and foraging for food).

Perhaps the first humans to witness the marvel of agriculture 10,000 – 13,000 years ago thought it to be science fiction-esque, just like some among us feel when they witness greens and lettuces growing indoors in PVC channels.

More needs to be done to reduce the environmental impact of materials used in hydroponics but the “unnatural” argument is rather shallow.

The Benefits of Hydroponic Farming

If we pause enough to put our prejudices aside, we may actually see that hydroponic farms bring a lot of benefits when compared to both conventional farming and organic farming.

Where organic is environmentally more beneficial than conventional, hydroponic/vertical farming is more sustainable in the long run.

Here are a few reasons why:

Hydroponic farming can yield up to 10 times more produce compared to soil-based farming on the same parcel of land.

Put another way, what takes 10 acres of soil-based farms to produce, can be achieved with one acre of hydroponic farms. That can mean 9 acres of land saved from being used for agriculture, each time.

The benefits can be even higher if compared to organic farms, which supposedly produce lower yields than even conventional farms (and therefore will require more space for a certain yield). See diagram next page)

Given how agriculture is a leading cause of deforestation and biodiversity loss, if less land can be used to produce the same amount of food it will hugely benefit the environment in many ways.

With a growing population that needs to be fed, there is already tremendous pressure on the earth’s forests which are being cleared everyday to accommodate farmlands.

With hydroponic farms, we may not need to cut down our forests.

Agriculture is the greatest user of freshwater on the planet; it uses 70% of all freshwater available.

Hydroponic farming however is so efficient that it uses just 10% of water used by soil-based agriculture. This is due to the fact that hydroponic systems allow recycling and reuse of water and nutrient solutions, and the fact that no water is wasted (Source: How stuff works)

With increasing evidence of water scarcity and looming droughts, we can and should save all the water we can.

To save water and at the same time, produce enough food to feed the world, we may want to give hydroponics a fair chance.

Hydroponics does not require use of pesticides

Plants growing in hydroponic systems are healthy and thriving, leaving them less vulnerable to pest attacks. To counter pests that do attack, most farms use natural pest control methods like planting companion crops and using ladybugs, lacewings, etc.

Bambi Turner suggests that since hydroponic farms use minimal chemicals, they may even be considered organic in some places (see Food and Hydroponics labeling, Bambi Turner)

That also means that such crops don’t have to be flown half way across the world to meet the demand in the off-season.

This can change the whole landscape of planning, growing and transportation of food, based on seasons.

Hydroponic farms can thrive even in deserts

And indeed they do. Both in geographical desert areas (Arizona, Texas, the Middle East and Australia) and food deserts (urban areas that lack access to fresh produce), small and large scale hydroponic farms have been functioning for years, with many more on the horizon.

This means that more people can have access to fresh produce, the produce itself can be a lot more fresh (sometimes the produce comes from farm-to-fork on the same day, as opposed to the 3-7 days it takes to bring them from farms far away) and the food miles are reduced (resulting in lesser emissions).

So is hydroponic produce organic?

As the article points out, there is nothing in the current USA organic certification program that precludes hydroponics from being a part of it.

By ignoring the opponents’ arguments against hydroponics, the USDA has left the doors open for hydroponic farms to consider becoming organic certified.

What may deter hydroponic growers from seeking organic certification are the prohibitive costs associated with being certified.

If farms decide to get certified, the costs will ultimately get passed on to the customers. By not opting for certification and continuing to produce pesticide-free fresh produce, many hydroponic farms ensure that consumers can afford their products.

Where does the consumer stand?

While the war of the farm worlds continues to rage, it is the consumer who faces the difficult decision of choosing.

To organic or not organic, to hydroponic or just stick to dirt? In the end it all boils down to what the consumer wants.

Irrespective of whether hydroponics will be accepted or denied in the organic circles, it clearly leads the sustainability race (read more on ‘Why organic farming is not sustainable’).

Maybe, at the end of the day, that’s all that matters.

The author Preeti Shanker is studying Sustainability Management at Columbia University, NY and also interning at Blue Planet Consulting where she manages data and tools related to hydroponics and vertical farming. 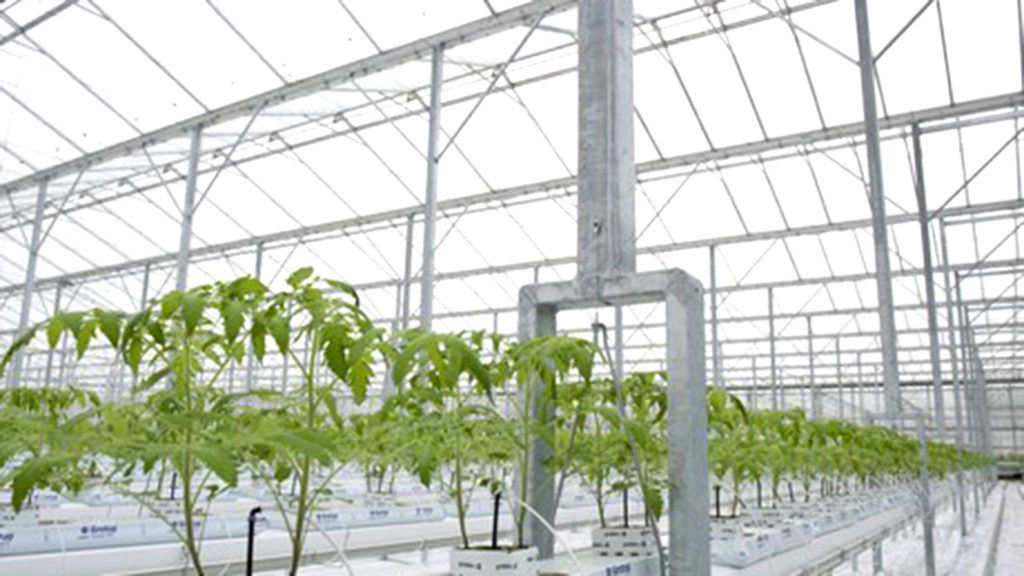