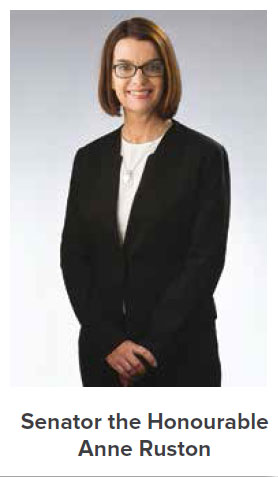 There was a significant outcome for Australia’s horticultural industries following the change of leadership in the Australian Government with the appointment of the sector’s own dedicated minister, Assistant Minister for Agriculture and Water Resources Senator Anne Ruston.

Senator Ruston, based in one of Australia’s largest horticultural regions (South Australia’s Riverland), has extensive experience in the sector. A grower and irrigator herself before entering Parliament, Senator Ruston has been very active in the horticulture space, working closely with industry on issues such as biosecurity, export market access and levies for research and development.

In addition to horticulture, Senator Ruston will also have responsibility for the fisheries and forestry sectors and the wine industry, as well as a share of responsibilities for water reform in the Murray Darling Basin with Minister for Agriculture and Water Resources Barnaby Joyce.

There have also been a number of significant positive developments for Australian horticulture since Minister Joyce addressed the Horticulture Industry Forum in March this year.

First and foremost was the release in July of the Government’s Agricultural Competitiveness White Paper, a $4 billion investment in rural Australia meeting the Coalition’s commitments to reduce the regulatory burden on farmers, provide better access to agricultural and veterinary chemicals, a stronger biosecurity regime and substantial supportive infrastructure.

Many of the White Paper’s measures will support improved access to premium overseas markets for Australian horticultural producers.

Finalisation of the China-Australia Free Trade Agreement (ChAFTA), represents a massive opportunity for Australian horticulture. When it comes into force, all Chinese tariffs on Australian horticultural products will be eliminated in four years (except for citrus, where tariffs of up to 12% will be eliminated in eight years). Citrus exports to China have already grown strongly, totalling $31 million in 2014 compared to just $5 million in 2012.

Mango exports to Japan almost doubled in the first quarter of 2015 compared to the same period in 2014.

The reduction in Japanese table grape tariffs has seen exports of this commodity to Japan rise from virtually a zero base in 2014 to almost $8.5 million in 2015.

Under the Korea-Australia Free Trade Agreement (KAFTA), mango exports for the first two months of 2015 were almost triple than for the same period last year on the back of a 20% tariff reduction (Korean tariffs on Australian mangoes will be completely eliminated in 10 years).

There have also been significant export gains for Australian table grapes and macadamias in the Korean market thanks to substantial tariff reductions.

The enormous potential benefits and opportunities provided by the North Asia FTAs are already being realised, underlining the critical importance of these agreements for Australia’s horticulture sector.

In May this year, Minister Joyce announced $27.6 million in grants from the first round of the Australian Government’s Rural R&D for Profit Program.

The Australian Government continues its strong support for the nation’s horticultural industries and is delivering on significant commitments to the sector.