The Biggest Issue For Growers Is Labour Management

The Biggest Issue For Growers Is Labour Management

This visit was sponsored by NSW Government’s Local Land Services (LLS) in conjunction with VegNet which is supported by Horticulture Innovation.  There was an informative presentation by Matthew Plunkett from LLS about their projects and industry support.

Nathan Clackson gave an insightful talk to PCA members and guests about the common theme with Australian greenhouse growers and the disproportionate cost of labour, compared with the cost of the plant, fertiliser and all other inputs into the cost of production.

The top three costs are; labour, labour and labour. Cost of seedlings and all that is absolutely nothing in comparison. Even the rent of your land is nothing compared to labour, so we have got to the reduce labour costs per plant.

So we’ve implemented some machinery and got some better packing lines, and you saw up the top there, we are building and modifying our shed. The a new one will hopefully get everything a bit more streamlined, to simplify handling and therefore labour costs on a profit/loss basis.

We’re trying to simplify the laborer’s thought process so they just chop, bunch or crate. If they don’t have to think, it’s good.

If you look around there, lots of staff and a lot of manual labour. Then you have a bit of very hot weather like the last week and a half and then there’s white blister, a fungal bit of disease.

We make sure the staff picking are looking to make sure there’s no spots on what is packed. Supermarkets have zero tolerance for anything out of spec.

We tried packing and the cutting in the shed rather than on top on the NFT tables and found a lot more breakage etc.

We tried a $30,000 machine to pack in the sheds. We would pick it first in the morning into crates and by nine o’clock have it in the shed, this was to avoid the stinking heat in the middle of summer.

However that labour rate was probably 20 units per man-hour slower in the shed with the pulling part in the morning and the transport back and forth compared to picking and packing on the growing tables. We then modified the way we harvest on farm to avoid the summer heat but also reduce the man-hours involved.

We have to be careful with just the sort of yo-yo weather this time of the year in late summer and early autumn.

Everything from a bit of rain, high humidity for a couple of days, no light – white blister everywhere, then a 40 degree Celsius day.

There’s a lot of talk recently about precision robotics replacing labour including drones but, to be honest, there’s not much actually happening and we are still years away from it. I’d love to have it on our soil farm because weeds are a massive issue in sand. Chemical controls are near useless for weeds in soil. We get more blow-in weeds than we actually kill. If you look around, there are not many farmers locally, maybe a couple of properties with some cows and/or horses. They don’t mow the grass so all their fireweed blows over. Fleabane’s a particularly bad one and the impact was terrible last year. Weeds are a big problem on our other local soil farm. I guess most soil farmers have got the same issue.

There is a Japanese robot out there now that picks one strawberry every half hour and another robot that picks capsicum and that’s about it. I know for greenhouses, there are auto un-winders for your high-wire vine crops starting to come through now. But physical robots, I think they’re all in the research labs, and they’re billion-dollar machines, so they are not feasible for us here yet.

In winter it takes six weeks to harvest for hydroponic Asian vegetables.

In summertime, when crops advance very quickly we have to get in early, get it cut, fill the orders.

Talking about robots, ask these workers here doing the harvesting and what they are like after, 40 hours in 40-degree heat!

In a perfect world we would do a lot differently. We would have a central pack house work around that and bring the work to the workers. At the moment, in our existing set-up, unfortunately we do it the other way around. 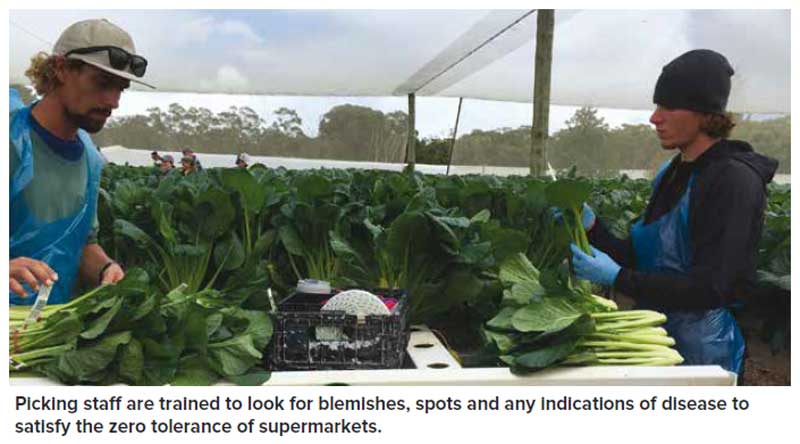 We would love some form of moving gully, moving benches and some way of bringing the work to the worker. The moving gully, I think, it’s quite high capital to pay for it, and with the current market prices, it’s not worth the investment yet.

We also grow basil in a separate greenhouse. If basil were grown outside, any bit of rain or water at night the leaves go black the next day. Basil does not like wet weather and the resulting black leaf takes more labour to pick it off.

So we try and grow a perfect plant, under cover which means less labour.

Every time I make a mistake, it costs me. That’s the sort of theory we try and work on with our ‘growing’ business. Minimising our mistakes as growers makes our harvest better for our staff. We cannot afford to be lazy, inefficient or over thinking. We’d rather make some money.