A Brief History of Hydroponic Growing

At its 2019 annual general meeting, Protected Cropping Australia celebrated the 30th anniversary of the Australian Hydroponic Association (now PCA). Rick Donnan traced its development. In this article he expands the view to present to the wider background of commercial hydroponics on a global scale and its influence on Australia.

Hydroponic techniques have been widely used for scientific plant nutrition research from the 17th century onwards, however the use of hydroponics on a broader commercial scale, didn’t start until the 20th century.

At the beginning of the 20th century, a significant greenhouse industry was developing, especially in the US, The Netherlands and in England. Growing was in soil, mostly using horse manure as fertiliser. Moving into the 1920s, especially in the US, cars and trucks were rapidly replacing horses, which led to an ever-increasing shortage of manure. Universities and agricultural research stations began looking for alternatives to horse manure including examining the potentials of hydroponics.

The most famous, or perhaps infamous, researcher at the time was Dr William Gericke of the University of California, Berkley in the US. He developed a tank system with mesh positioned several centimetres above the water level. A layer of ‘leaf litter’ was spread on the mesh. Plants were placed into this layer so their roots bridged the air gap and went into the water.

Dr Gericke was scientist but also a publicity seeker. In 1936 he announced his ‘invention’, which was publicised using a now-famous photo of him up a ladder harvesting tomatoes. The media went wild dubbing his invention “the eighth wonder of the world”. Entrepreneurs moved in and were soon selling systems along with high priced nutrients to anyone who would buy them.

All these systems failed. There were two main reasons for the failures. Firstly, the main skill required to grow a hydroponic crop is to know how to grow that crop. An ignorant grower is a guaranteed failure. Secondly, this was a very vulnerable system and needed regular analysis to keep the nutrient solution in balance. Dr Gericke had the skills and analytical backup that others did not have.

Dr Gericke is sometimes quoted as ‘The Father of Hydroponics’. I disagree with this as he almost finished off commercial hydroponics before it even started. At the same time he was trumpeting his success, there were other researchers who were successfully developing sand and gravel culture.

Like many technologies, war also played its part in developing hydroponics. During World War 2, the US Army established a hydroponic unit and set up its first successful installation on Ascension Island, an isolated volcanic island in the South Atlantic Ocean.

The island was barren but became an important central Atlantic staging post for moving planes from the US to England. By the war’s end systems had also been set up in Central America, North Africa, and on several other islands. The system was sub-irrigated gravel beds, three in sequence fed recirculated flood and drain.

After the war, occupation forces (including Australians) were sent to Japan where commanders were worried that troops could catch diseases from consuming local produce grown using ‘night soil’. Consequently they set up Camp Chofu, a 22-ha hydroponic farm using the same type of system that had been set up on Ascension Island.

By the time the occupation forces were being reduced in the early 1950s the Korean War had started so Camp Chofu continued to operate. It ran successfully for almost 10 years. The reason for its success was that it used skilled managers such as horticulturists, entomologists and analysts.

Following Camp Chofu, the first successful use of commercial hydroponic farming was in Canada where there was a relatively large glasshouse industry growing tomatoes. Unfortunately soils in these glasshouses became infected with fusarium, which proved had to control. By the mid 1960s the best option to continue growing tomatoes in the glasshouses was to get out of soil and into hydroponics.

Research stations developed systems using dripper-fed bags of sawdust (wood chip). These were successful as the growers were skilled, there had been a change in growing medium and local research stations wrote useful and detailed hydroponic manuals, as well as providing extension support.

Commercial hydroponics started taking off around the world in the 1970s. As in Canada there was a large, advanced glasshouse industry in The Netherlands where growing was in soil sterilised using methyl bromide. Once methyl bromide was detected contaminating the canal systems its use had to cease by 1984. Dutch growers reverted to steam sterilising, however it was very expensive and relatively ineffective. These limitations to in-soil growing saw a significant move out of soil into hydroponics.

Rockwool had recently been developed as an inert medium and it was taken up widely by the new industry. Research stations that developed nutrient solutions and guidelines to aid this new way of growing also helped boost success.

The conversion from soil to hydroponics was 100 per cent successful in The Netherlands as growers had the essential horticultural skills and were merely changing technique helped by significant support.

Back in the US, the story wasn’t as rosy. Hydroponics was not gaining traction and there were a high proportion of failures. Things weren’t going well in other areas too. As an extreme example, through the 1970s there were around 800 small commercial systems established on the Camp Chofu model. Unfortunately, by 1982, every one of the 800 had failed.

This happened as entrepreneurs, not businesses experienced in hydroponics, sold these systems. More importantly, it happened where they were sold to the wrong people for the wrong reasons. False promises such as “great financial returns” (wrong – as these returns were based on ridiculously inflated yields), “no knowledge of plants needed” (dead wrong), “very little work needed” (also wrong), and many other misleading statement led many unprepared people to buy into systems they were definitely not ready to use.

In Australia through the 1980s and 1990s the situation for hydroponics was about halfway between The Netherlands and the US: a mixture of success and failure.

Through the 1970s Australian carnation growers were moving from open field to polyhouses to reduce rain damage. However problems were arising with virulent fusarium causing major crop losses. Previously growers with a problem could move to another paddock, but they no longer had this option in a polyhouse. Getting out of the soil made sense.

In 1978 the Baguley Tray was developed using dripper-fed scoria with a small reservoir, later joined by slabs of rockwool. For those converting from soil to hydroponics, managing feeding and nutrition was often a challenge, but luckily carnation is a tolerant crop and the skills of the growers kept them successful.

Into the 1980s entrepreneurs began to appear. One of the first was an investment scheme that saw a one-hectare rigid plastic house set up near Ballarat in Victoria to grow mainly tomatoes and strawberries. The project was sold with a major advertising campaign that included much boasting of there being no growing experience needed. While their merchandising was excellent (pretty punnets for example) and they received plenty of media hype, when it came to production, their product failed to meet its hype. Among the many problems, shelf life was very low with punnets often containing strawberry slush rather than fruit. The damage done by the soft tomatoes they briefly sold set back the hydroponic tomato market by at least five years.

As the 1980s progressed, more entrepreneurs appeared, usually selling turnkey projects. Most greenhouse builders were reputable, however once others added hydroponic systems there were many shady package deals promoted.

These usually offered great financial returns based on ridiculously unrealistic plant densities. Calculations were made taking high yields at standard plant densities (such as 2.5 plants/m2 for tomatoes) then maintaining these yields at much higher density. In practice the main food of plants is sunlight, so increasing the number of plants reduces the sunlight per plant and consequently its yield.

In probably the worst case, tomato density was lifted to 16 plants/m2 and the equivalent calculated yield was 480kg/m2/year when the world record was just under 50kg. A crop planted at this density grew with extreme vegetation and no fruit then collapsed with uncontrollable fungal disease – hence the actual yield was zero.

Luckily this scheme made few sales because they oversold, claiming a payback period of less than one year. Potential buyers only had to query: “If it’s so good, why are you selling and not growing?”.

At this time there appeared an increasing number of ‘consultants’. While there were a few skilled crop consultants in Australia, far more were doubtful at best. As well as being paid for advice, they were often involved in promoting hydroponic systems. Quite often their only qualification was that they had failed as a commercial hydroponic grower.

As an indication of how the term ‘consultant’ had become a dirty word in the hydroponics industry was apparent at that first AHA conference in 1990. As President, I gave a talk at the conference dinner on what the AHA hoped to do. When I mentioned accrediting consultants, the 300 attendees burst into spontaneous applause.

Experts in state departments plus growers and allied traders active within the industry were getting increasingly concerned about the activities of ‘consultants’ and the extreme amount of misinformation that was being circulated. There was seen to be a critical need to get realistic information out into the marketplace. To this end a group was formed in 1988 to organise a major national conference, which we held in 1990.

The group decided to plan a South Pacific Hydroponic Conference to be held in 1990. To formalise the organisation of the conference, the Australian Hydroponic Association was incorporated in September 1989, with this group as members.

Our History
Past PCA Chairs

Rick Donnan spoke about the history of PCA and the Australian Hydroponics Association in 2019. 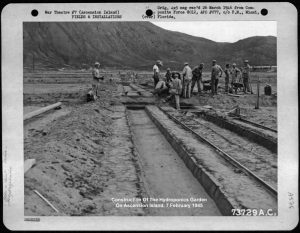 Building the US Army hydroponic unit on Ascension Island during World War 2. 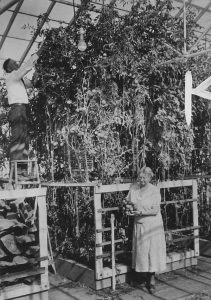 The so-called ‘father’ of hydroponics, Dr Gericke, with his wife harvesting tomatoes from the tank system he developed and promoted in 1936. 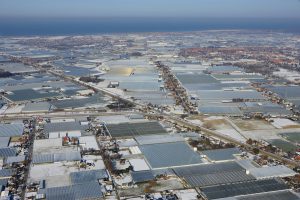 ‘Glass city’ in Holland. These growers had 100 per cent conversion from soil to hydroponics during the 1980s.